Best 8 tennis courts in LA County (and what they cost)

Over 87 million people play tennis all over the world, from Australia to France and Switzerland to Singapore.

Tennis is a sport that requires strength, power, flexibility, and agility. It is enjoyed by people of all ages, from young children to senior citizens.

With so many people playing tennis, courts have sprung up everywhere — in fitness clubs, country clubs, and city parks.

When you grab your racquet and tennis balls to go play a game, you need to know you are heading to quality courts. There is nothing worse than showing up and finding cracks in the surface and trash in the net.

The Paseo Club began as a tennis club almost 20 years ago. It has since expanded to include pickleball courts, fitness classes, a junior-Olympic pool, cafe, and spa.

Even though we love our courts, we know there are some other great options in the area. So, in this article, we will tell you where the best tennis courts are in Los Angeles County.

The tennis courts are listed in alphabetical order. We selected them for being well-made and well-maintained. We also provided a compilation of courts of varying costs so that there is an option to meet everyone’s budget. 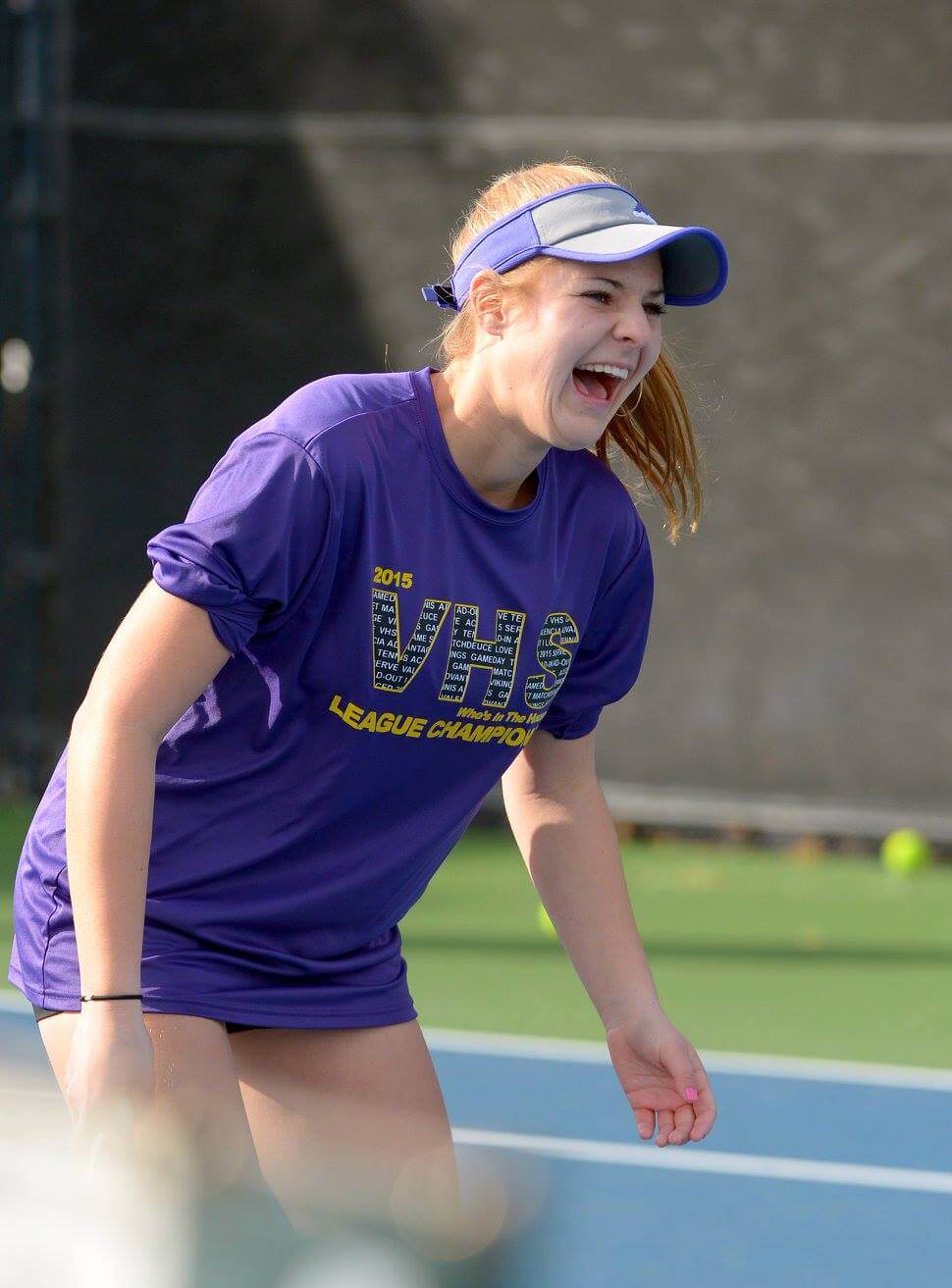 Old school and unassuming, the Beverly Hills Tennis Club has only five hard courts, a small gym, and a pool. It is easy to get a court, even with low numbers, but you’ll be hard-pressed to find many people available for matches.

The staff is USPTA (United States Professional Tennis Association) certified and offers training programs to members of all ages and abilities. The clientele is top-notch, including members like Justin Timberlake.

A little more into the tennis scene compared to Beverly Hills Tennis Club, there are only six courts at Brentwood, but the competition is high. An adjoining golf course makes this club pretty pricey, but these courts are beautiful.

They also have a clubhouse with great food, wine, and cocktails, and a tavern for drinks and pizza. 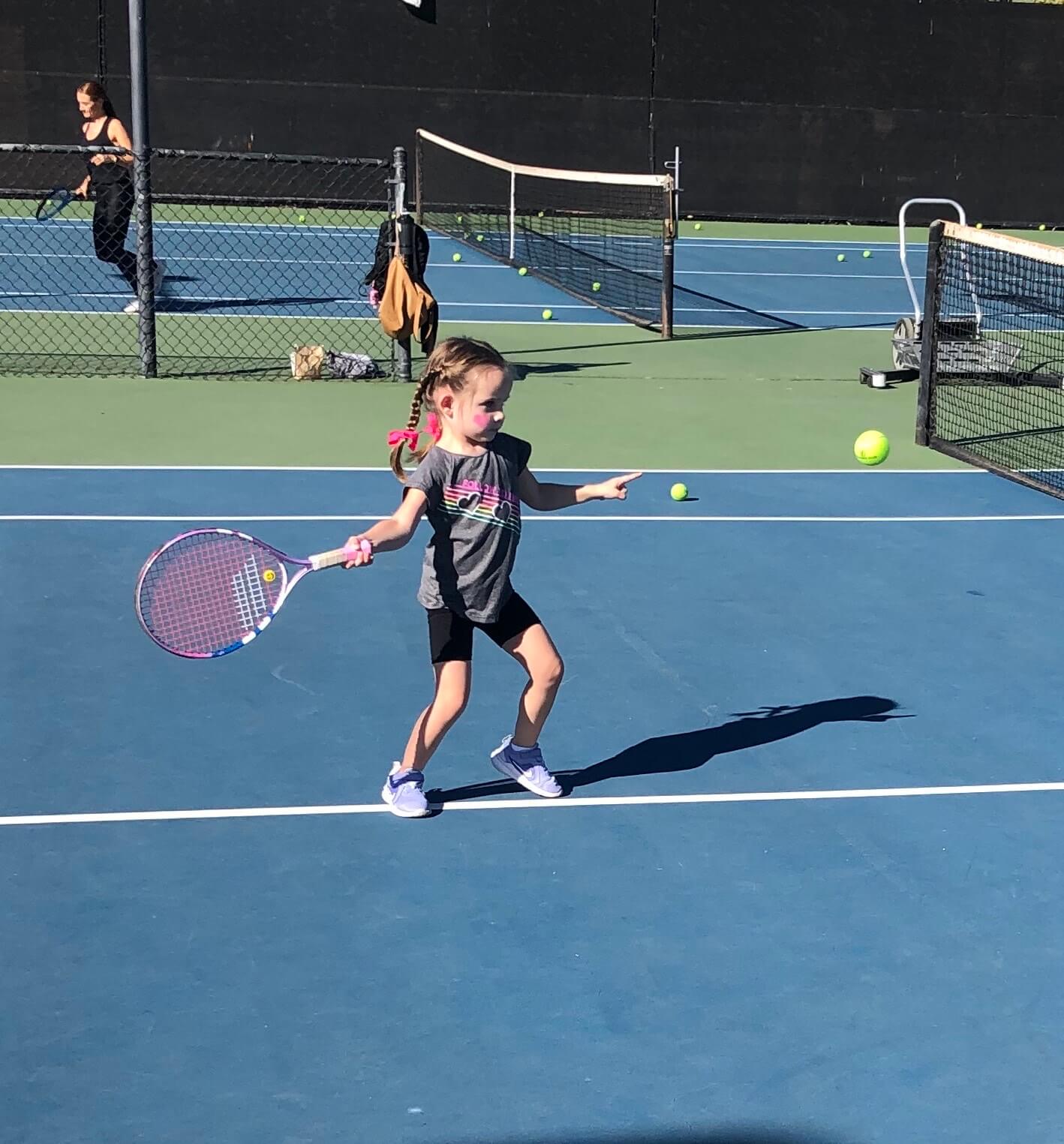 At the corner of Glendale and Temple in Los Angeles are the nine tennis courts at Echo Park. These courts are free to use and are available on a first come, first served basis.

The courts are open from sunrise to 10 pm. The courts have lights for nighttime games.

At Echo Park, there is no court parking, only street parking. There are also no restrooms. The closest restroom is at the Echo Park Recreational Center, which is 1 ½ blocks away.

The LA park staff offers tennis classes to the community. When classes are in session, some of the courts are reserved for instruction and are not available to the general public.

The LA Tennis Club has been around for 102 years, and it is definitely a tennis paradise, with 14 hard courts and 2 clay courts.

There is also a great bar, an upgraded gym, and a pool.

The fees are available upon request. 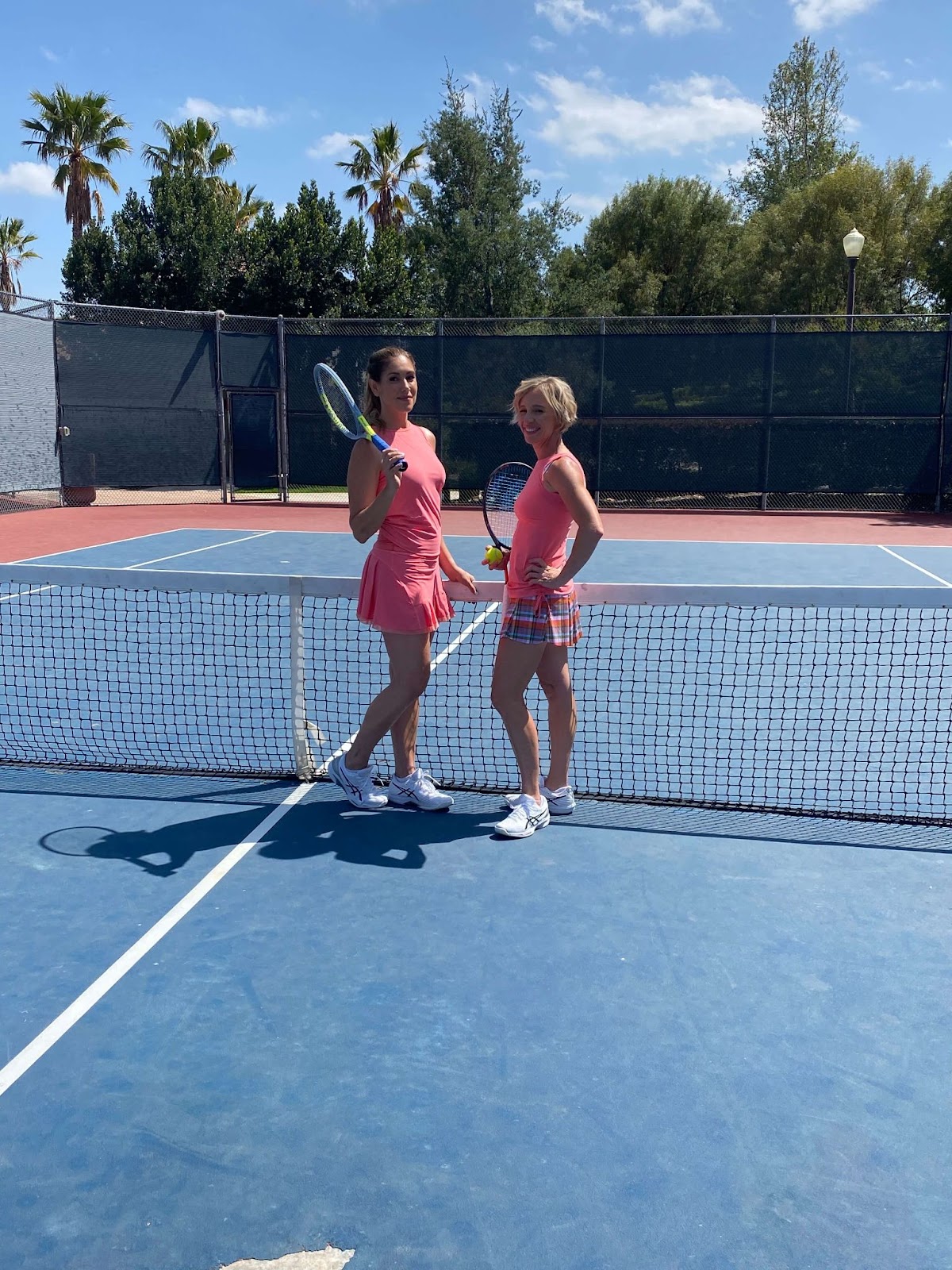 The espresso bar here is a huge draw, as is the fencing on each court to keep them separate. They also have a gym, a Pilates studio, and trainers for both spaces.

Plummer Park is part of the park system in West Hollywood. The tennis and pickleball courts are open to the public from 7 am or 8 am (depending on the day and the court)  - 10 pm.

To play on the courts, you must first make a reservation by using the website, www.playbypoint.com, or the playbypoint app.

There are both free and paid options. The free options allow you to reserve a court up to 24 hours prior and for one hour only (unless nobody is waiting, and then you are allowed to play longer)

The paid version costs $8 per hour and allows you to play in 2-hour increments and make reservations many days in advance.

There is a pro shop, restrooms, and staff available for private and group lessons.

This tennis club is one of the largest in the western United States. There is many courts and players, which makes the Riveria Club a social hotspot for tennis players.

There are two levels of courts which give plenty of space for tennis. There are a total of 24 courts — 22 hard courts and 2 clay courts. Just four of the courts are for pickleball.

They offer both an adult and a junior academy for private and group lessons.

Members include tennis greats like Pete Sampras. The tennis club is housed at the Riviera Country Club, where the golf course is the primary draw.

Fees are available upon request. 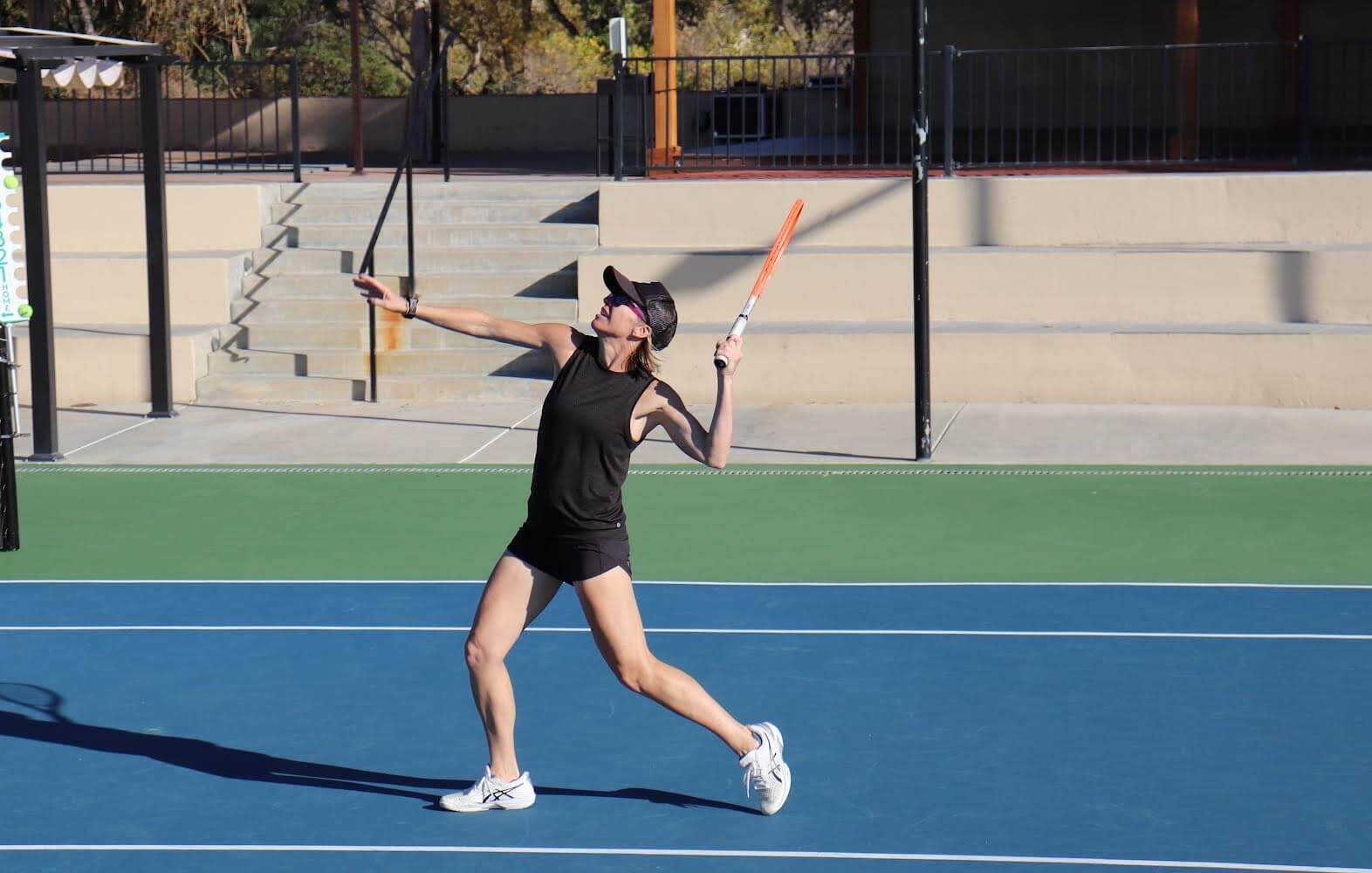 In West Los Angeles, there is Westwood Park which has eight courts. The courts can be reserved for up to one week before you want to use them.

What types of courts are there?

Hard courts are constructed from a base material of concrete or asphalt and have a finished surface made of acrylic or polyurethane. These surfaces are painted in different colors with white lines.

Hard courts may also have a cushioned layer under the surface depending on the desired court speed.

What makes a great tennis court?

The best courts are the well-maintained ones. Cracks are inevitable over time, but consistent attention to detail with nets and net straps, clear lines, and cleanliness on the court surface makes for the best play. 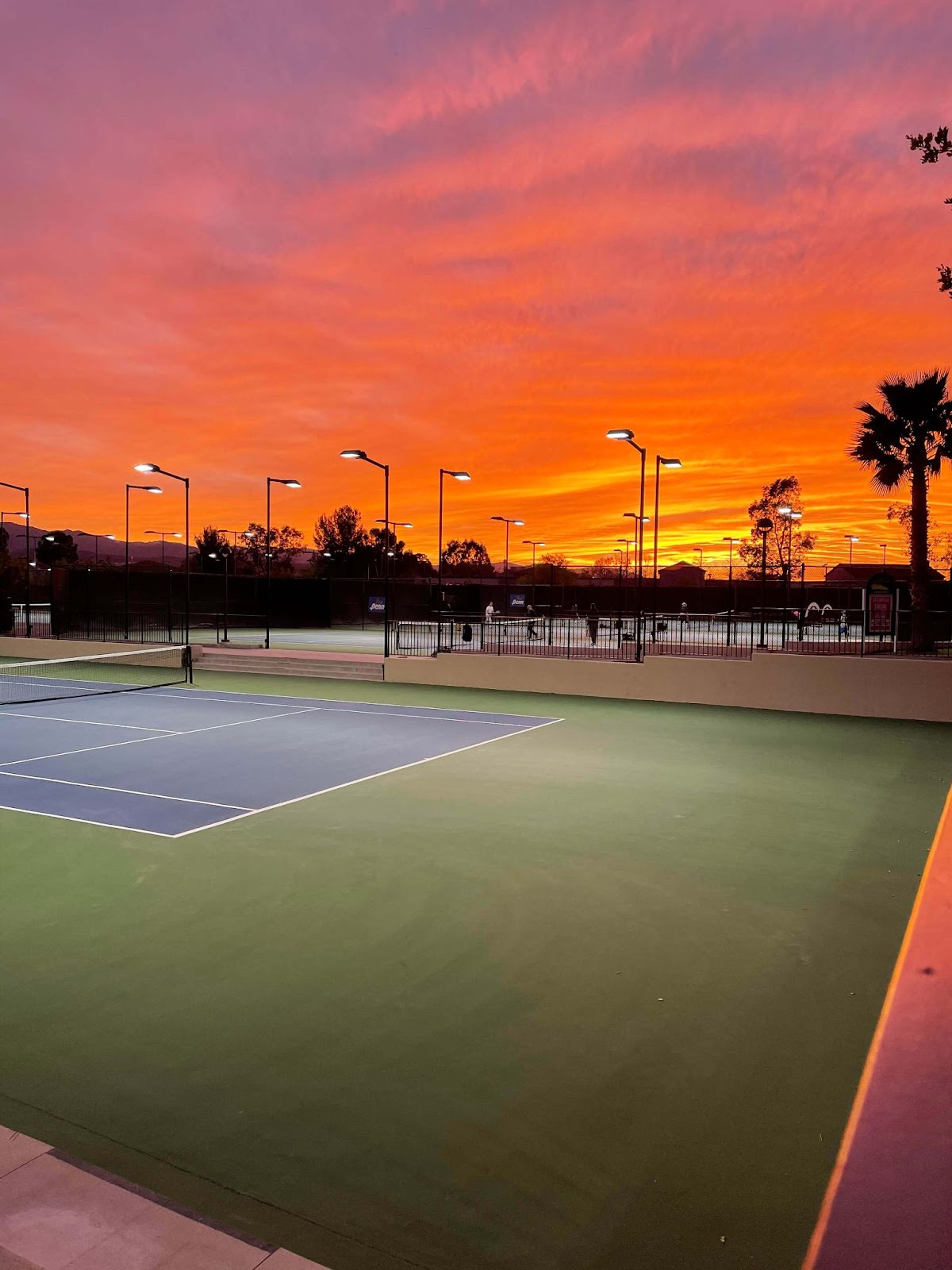 What amenities should people look for to enhance their tennis experience?

From your local parks and high schools to country clubs and private facilities, the overall experience is always made better by having fun with your friends and opponents. Good water stations and benches with shade from the California heat don’t hurt, either!

Los Angeles County is the home to numerous tennis courts sprinkled throughout the region. From high-end country clubs to community parks in the center of the city, there are courts for everyone.

Now that you have read this article, you know where the highest quality tennis courts are near you, how many courts are at the facility, and how much it costs to use them.

The Paseo Club has 12 tennis courts and 11 pickleball courts. Tennis events are held regularly, including competitions, round robins, socials, and charity fundraisers.

Paseo offers a junior program for kids as young as 3 ½ through teens. Adults can participate in group classes or get private lessons.

Learn more about our junior program or why fitness is so important for kids.

In the Santa Clarita Valley, the Paseo Club has many courts ready for tennis players of all ages and levels. Come see them for yourself on a Paseo Club tour. Schedule yours today!